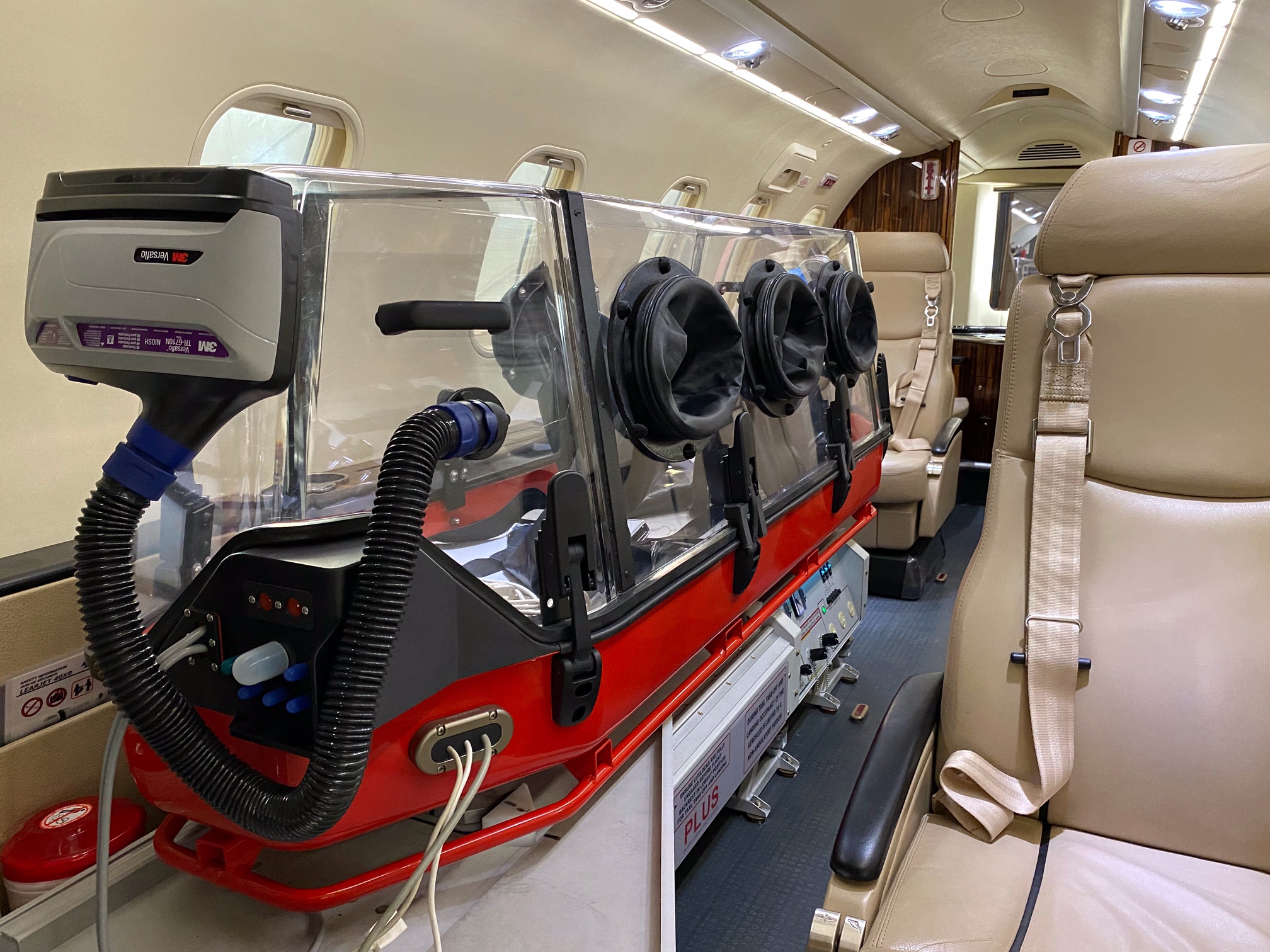 When Fox Flight couldn’t find an appropriate patient isolation unit for its planes, the company built its own

When it comes to international medical repatriation, Fox Flight Air Ambulance has dealt with just about every imaginable case over the course of its almost 25 years in business. But when the COVID-19 pandemic essentially shut down the global travel industry in March of 2020, Fox Flight was presented with an unusual challenge.

”"COVID won’t be disappearing any time soon, especially in the developing world. And when you just look at recent history--with things like SARS, MERS, Zika, Ebola--the need to transport infectious patients is probably here to stay."

The small Toronto-based company employs a fleet of specially configured Learjets to transport sick and injured patients home from wherever they happen to be in the world. Fox Flight routinely transports patients with standard broken limbs as well as heart attack and stroke victims hooked up to breathing tubes and multiple monitors. They have even moved premature babies and, once, a victim of a hippo attack. Prior to COVID however, the company rarely ever got called to move a patient with an infectious disease.

“When someone contracts an infectious disease abroad, the protocol has always been to isolate and treat them where they are until the case resolves itself,” explains company founder and president David Fox. “That’s because moving airborne infectious disease patients is dangerous for the flight crew and anyone else the patient comes in contact with. Obviously it’s a massive challenge moving that kind of patient over long distances in a small plane.”

But things change in a pandemic, and shortly after travel bans went into effect around the world Fox Flight began to receive inquiries from travel insurance companies looking to move COVID-positive travelers stuck in foreign countries. While moving infectious patients is possible, it is usually only done when the patient is fully vented (breathing through a tube in a closed-air system) and heavily sedated. Moving an infectious patient who is not vented requires some kind of airtight, mobile patient isolation unit, so Fox began to research the units currently available on the market.

“It basically came down to two options,” says Fox. “The first was a kind of soft, plastic bag unit that is sealed over the stretcher. We ruled that out immediately because it’s not puncture- or tear-proof and we can’t afford to breach the airtight bag over the ocean at 30,000 feet. The second option was a hard plastic pod-type unit that ticked all the boxes we would need except one – it wouldn’t fit in our planes.”

Because stretchered patients can only be loaded and unloaded via the relatively narrow entry door on his Learjet-40XRs, Fox quickly realized that the isolation unit he required didn’t exist. If he wanted a unit that would work for his planes and his application, Fox would have to build it himself. Moreover, because most air ambulance carriers use Learjet-40 Series planes or smaller, companies around the world would be faced with the same problem.

Fox may have known what he needed in a mobile isolation unit, but, as a critical care nurse by trade, he didn’t know the first thing about building one. For that he turned to the Canadian Tooling and Machining Association. Fox sketched out his requirements for the unit along with some basic size specifications and the CTMA passed the inquiry along to its membership. A few days later Fox was contacted by Louis Jahn, president of Oldcastle, Ontario-based Jahn Engineering, and a meeting was set up in late April 2020.

“David gave us a basic outline of what he wanted to do, and it was a pretty complex challenge,” Jahn recalls. “Essentially he wanted to create an airtight hospital bed, complete with access for lines and monitors and hands-on access for the medical crew. The trick was it had to fit in the door of his planes and leave room in the cabin for the crew to move around — and a Learjet is not a 747.”

The two companies entered into a partnership agreement to develop the unit, which they dubbed the ISO-Pod. While mobile isolation units are not exactly in their wheelhouse, Jahn Engineering was more than up to the challenge. The company was founded in 1961 by Louis Jahn’s father and uncle as a custom machine shop specializing in tooling for automotive manufacturing. Over the years it has expanded into areas like aerospace and heavy truck manufacturing, robotics, precision testing equipment and product design and prototyping.

The process began with converting Fox’s basic sketches into detailed technical drawings. Jahn then produced a number of Styrofoam models designed to reflect various potential shapes and dimensions for the finished unit. Each model was brought up to the Fox Flight hangar at Pearson International Airport in Toronto to check and adjust for the various tolerances inside the plane. Says Jahn, “Size and shape were key: we took lots of time to make sure we got to the optimum dimensions to maximize patient comfort as well as ergonomic efficiency before we moved on to the next phase.”

“It was also important to us that the unit be strong and robust, because it has to be loaded and unloaded repeatedly into air and ground ambulances, largely by hand,” adds Fox. “Plus the unit has to be cleaned and disinfected after each use, and smooth, hard surfaces are always best for cleaning.”

Once the basic dimensions were established, work began on designing the top and bottom halves of the unit to allow for essential functions. Holes had to be cut into the clear Lexan plastic top shell to accommodate a self-contained air filtration system as well as four secure glove ports to allow access the patient. An airtight pass-through membrane had to be incorporated into the aluminum tub base to allow for lines for intravenous and heart and lung monitors. The airtight seal between the top and bottom halves of the unit was achieved using a latching system borrowed from automotive applications.

“The infectious patient has to be placed in the unit in a sterile environment in the hospital and the lines are attached then,” explains Jahn. “Once the patient is sealed inside, it’s vital that the unit remain airtight for the safety of the medical crew transporting the patient. Maintaining that airtight seal in a unit that is constantly moving—in a plane, in an ambulance, being loaded and unloaded–was one of our biggest challenges.”

Airflow within the pod is provided by a compact blower unit, the same kind of unit used for the breathing apparatus on HAZMAT suits in research laboratories and cleanrooms. The unit draws air in at the top end and circulates it through the pod and eventually through a medical quality HEPA filter at the bottom end before recirculating the air back into the environment.

Another vital component of the design is the unit’s stretcher mounting system. Permanently attached to the base, the metal mounting frame allows the pod to be securely locked into place on any standard ambulance stretcher.

“Obviously you can’t have the unit becoming unmoored during transport with a patient inside, and that’s especially important in a plane where you can encounter turbulence at altitude,” says Fox, who consulted with Jahn throughout the design process. “For that reason we wanted to make sure the mounting system on the pod was designed to go well beyond the standard shear-weight specifications for our regular stretcher system.”

From the beginning of the project in May 2020 until May 2021, Jahn Engineering built five different ISO-Pod prototypes, making changes and improvements to the basic design and core systems with each iteration.

“Designing a device like this, for this kind of application, was something new for us, so it was an interesting challenge for sure,” says Jahn. “With each new prototype we learned lessons; we had to take each one up to Toronto to test it in the plane and make adjustments to overcome technical issues.”

Ultimately they settled on a design that is almost 200cm long, 54.6cm wide and 67.3cm tall. That makes the overall footprint of the ISO-Pod about 40 percent smaller than the leading hard-bodied mobile isolation unit currently on the market. Crucially, the ISO-Pod is 15 percent smaller in terms of width, which allows it to get in the door and make the necessary turn to load on smaller aircraft. At 45kg unloaded, the ISO-Pod weighs some 13kg less than its larger competitor, and it is capable of handling patients weighing up to 115kg. “Every kilo makes a difference for the medical crew when you’re trying to load or unload a patient,” points out Fox.

While the ISO-Pod was originally designed for aeromedical applications, it was a simple process for Jahn to expand the platform for use in ground ambulances where size is not such a limiting factor. The larger version of the ISO-Pod has all the same technical features but measures 213.4cm long, 76.2cm wide and 67.3cm tall. The large unit weighs in at 55kg unloaded, with a maximum patient capacity of 135kg.

Jahn believes the fifth iteration of the ISO-Pod design is the optimal version and he has already started marketing the larger unit to ground ambulance operators. But because the smaller version of the ISO-Pod was designed specifically for use in planes, it must still undergo final review and testing before it can be certified for aircraft use by Transport Canada.

“Any change or addition to an aircraft, no matter how small, has to be reviewed for safety compliance,” explains Robert Gow, president of Midland, Ontario-based Avionics Design Services Ltd., a private company delegated by Transport Canada to review and approve modifications to Canadian aircraft. “Any modification has to show compliance with the original standards for that particular aircraft with respect to things like weight, cabin egress, decompression and fire hazards.”

In addition to reviewing all the technical specifications and examining all aspects of the prototype, Avionics Design Services also conducts live cabin tests with the unit to ensure it does not compromise safety for the patient, the crew or any other passengers.

“Jahn Engineering contacted us and we got involved in the safety review for the unit quite early on, basically at the prototype stage,” explains Gow. “That allowed us to provide guidance during the design process that would help steer the project toward eventual certification. And once a modification is approved for use in Canada, there is basically no difference with the air-worthiness standards in the US and Europe.”

Even as the pandemic begins to recede in much of the world, Fox believes patient isolation units will become standard equipment for air and ground ambulances worldwide.

“One lasting effect of the pandemic was to make transporting infectious patients a common practice in our industry,” he says. “COVID won’t be disappearing any time soon, especially in the developing world. And when you just look at recent history–with things like SARS, MERS, Zika, Ebola–the need to transport infectious patients is probably here to stay.”