(Toronto – September 1, 2017) – Fox Flight’s Air Ambulance, a Toronto-based international medical repatriation company, recently made a $25,000 donation to Wounded Warriors Canada. The funds will go to help support mental health programs for ill and injured Canadian Armed Forces members, first responders and their families. This initial donation is the first installment of a funding commitment that will see Fox Flight contribute a total of $100,000 to the charity over the next five years. 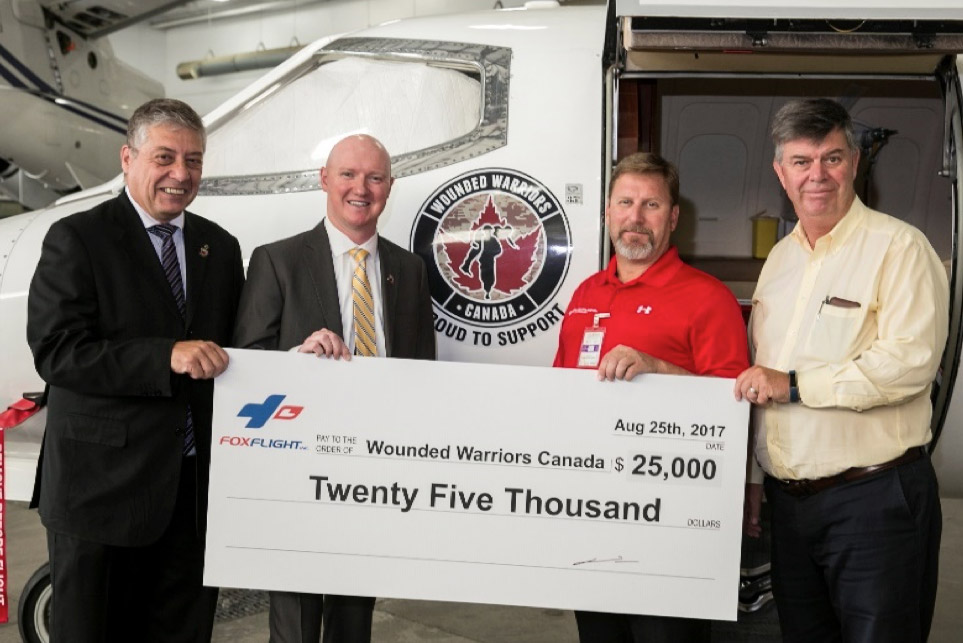 “We are delighted to be able to support Wounded Warriors and the great work they do to help members of our armed forces and first responders,” said Fox Flight president David Fox. “We specialize in helping sick and injured individuals get home to recover and resume their lives, so we know how important the programs that Wounded Warriors Canada provides are to the individuals who need them. If we can help make that happen, we are happy to do it.”

“Our organization is very grateful to Fox Flight Air Ambulance for their generous donation,” said Scott Maxwell, Executive Director of Wounded Warriors Canada. “These funds will go a long way in helping us deliver the kinds of quality mental health programs sick and injured military personnel and first responders often need to recover their lives. Partnerships with Canadian businesses like Fox Flight, and many others, play an essential part in making our programs possible.”

This year Wounded Warriors Canada will invest approximately $1.8M in a variety of mental health programs. In addition to its financial contributions, Fox Flight has also agreed to display the Wounded Warriors Canada logo on each of its four Learjet air ambulances to help raise awareness about the charity across Canada and around the world.

Founded in 2006, Wounded Warriors Canada is a national mental health charity whose mission is to honour and support ill and injured Canadian Armed Forces members, Veterans, First Responders and their families. The organization provides a wide range of programs and services for individual members and their families affected by Operational Stress Injuries. As a privately funded charity, the organization is made possible thanks to the care, compassion and generosity of Canadians and Canadian businesses from coast-to-coast-to-coast. Visit www.woundedwarriors.ca.