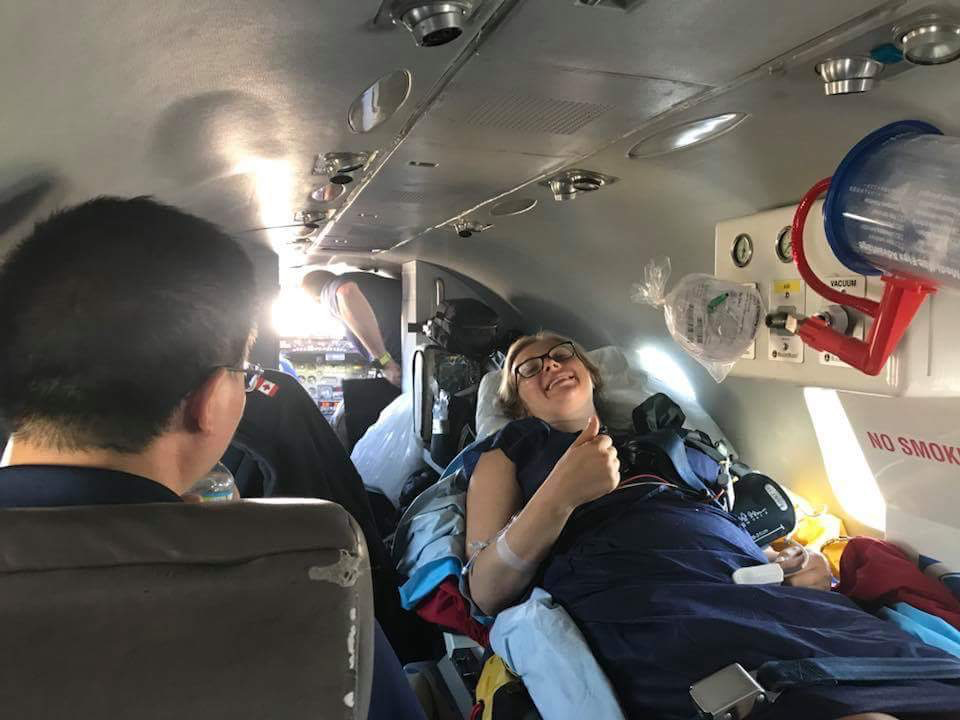 (Toronto, July 18, 2018) – Fox Flight Air Ambulance, a Toronto-based international medical repatriation company, recently played a central role in ending a terrifying ordeal for an American travelling in Spain. The case involved an exceedingly rare autoimmune disease, and the patient’s plight and struggle to get home garnered widespread media attention in the U.S., including from People magazine.

”“In more than 30 years working in the medical profession as a critical care nurse, I have never personally encountered a patient with this condition before. Thankfully, once it’s correctly diagnosed it can be treated with medication and the paralysis can be reversed.”

In early June, Kara Dunn, a 20-year-old college student from Temple, Arizona, was travelling in Spain with a friend and looking forward to her junior year in physiology studies at the University of Arizona. Just three days into her trip, on June 3, Dunn began to experience a strange tingling sensation in her feet and hands. By the next day she was unable to speak or move her limbs and was rushed to a local hospital. By June 5, Dunn was in a major hospital in Seville when the sudden paralysis spread to her respiratory system, forcing her to be intubated in order to breathe. The situation became dire when she subsequently developed pneumonia.

“I could feel them intubating me and it was the most terrifying experience you can imagine,” recalled Dunn, who is now recovering back home in Arizona. “I could hear the doctors talking about me and trying to figure out what was wrong, and all I could do was lie there not able to move or communicate. I had no idea if I would be permanently paralyzed or even survive.”

The doctors attending Dunn in Spain ultimately diagnosed her condition as Guillain-Barre Syndrome, a very rare autoimmune disorder that causes the body to attack its own nervous system. The condition begins with an overall feeling of weakness and a tingling sensation in either the head or the extremities and rapidly progresses to paralysis throughout the body.

“I’ve heard of GBS, but it is very rare,” said David Fox, president of Fox Flight. “In more than 30 years working in the medical profession as a critical care nurse, I have never personally encountered a patient with this condition before. Thankfully, once it’s correctly diagnosed it can be treated with medication and the paralysis can be reversed.”

Accurately Diagnosing Dunn’s condition was frustrated by the fact she was an especially rare case, explained Fox. Guillain-Barre Syndrome usually appears in men twice as often as women, and the usually mean onset age for the disease is 43.6 years, much older than Dunn. “She also had a variant of the disease, known as Miller-Fisher, which only appears in 1% to 5% of GBS patients, so it is harder to spot,” Fox added.

Following her diagnosis, Dunn spent the next two weeks in hospital in Seville undergoing intensive treatment to stabilize her condition to the point where she could at least breathe on her own and speak to doctors. Over time, she began to regain some feeling and movement in her limbs. She was comforted throughout her ordeal by her mother and brother, who flew to Spain immediately after learning she had been rushed to hospital.

Once Kara was stable, the Dunn family began to focus on getting her back to Arizona. Although the initial care she received in Spain certainly saved her life, the conditions were not conducive to a long-term stay. Her brother Ryan, himself a medical student, was also well aware that his sister’s full recovery depended on getting her to a dedicated neurological facility back in the States. Toward that end, Ryan began a GoFundMe campaign to raise money to pay for an emergency medical repatriation, as well as to cover the costs of the family’s stay in Spain and Kara’s rehabilitation at home. Thanks to extensive media coverage of the story in Arizona as well as in the national press, the GoFundMe campaign fell just short of reaching its goal of $100,000.

On June 15, Fox Flight was engaged by the assistance group On Call International to transfer Dunn back to Arizona. Two pilots and a two-person medical team, along with Ryan Dunn, accompanied Kara on the four-leg, 9,000-kilometre journey in one of Fox Flight’s specially configured Lear air ambulances. “I was so happy when I got in that air ambulance to go home,” said Dunn. “I’m so grateful to Fox Flight and everyone who contributed to the fund; if not for them I would have had to wait weeks to come home on a commercial flight.”

After a few days in hospital in Phoenix, Dunn was transferred to Barrow Neurological Institute, a facility that specializes in neuro-rehabilitation. Following several more weeks of intensive treatment and rehab, Dunn regained sensation and movement in her limbs, hands and feet. She was discharged in mid-July and is expected to make a full recovery.

“I can walk now and my dexterity is coming back,” Dunn said. “There is still some numbness in my toes, but that’s improving. I’m looking forward to getting back to school; I want to go to med school, and this experience will help me a lot dealing with patients down the road.”

Email: frank.condron@foxflight.com
(A high-res image is available upon request)